So, this weekend I am attending Anime North with my boyfriend for the very first time. I am super excited! It's a really big anime convention and there are lots of vendors, panels, and things going on all weekend. Angelic Pretty has a booth with their designer Chisa making a guest appearance. Minori whom I've seen online is also going to be there. And then on the last day is the big lolita tea party :-)

I worked a half day, helped pack up the car, and then we were on our way. The drive took a few hours and was fine with some traffic on the way. As soon as we checked into the hotel, I changed into a school girl outfit and braided my hair. 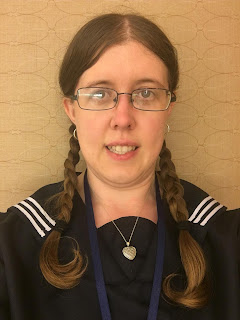 Then walked over to the con site to pick up our badges and check things out. There was a ton of people. I found the Angelic Pretty booth and browsed all the pretty items. There were dresses, purses, socks, and other accessories. I only bought a couple items though. I also chatted with one of the booth staff members about how much I loved the brand but had a tough time fitting into their clothes due to being a somewhat tall and plus-size lolita. I suggested things such as longer shoulder straps, more full back shirring pieces, and more normal waisted jsks. She seemed to be listening intently and asked where I usually buy lolita. I hope she takes my ideas into consideration for possible future designs/releases. I also got Chisa's autograph! I was so nervous/excited and warm from the heat that I felt suddenly dizzy and had to sit down for awhile.

Once I was feeling better we went to get in line for the Nominoichi, or flea market/garage sale. Inside it was very warm with people crowding around sales displays and spending their money. I looked around trying to figure out where to start. I caught sight of some lolita clothes and off I went to begin shopping. There was a variety of items available from lolita to manga, figures, plushies, posters, etc. Needless to say, I ended up with a few things at the end of the night. It was crazy but fun..

I got up early and headed over to get in line for viewing the Angelic Pretty fashion show. Wore my Kiki's Delivery Service dress. It's one of my favorites and perfect for the hot weather going on lately. I also couldn't resist wearing this cute star hairclip that I had gotten last night. 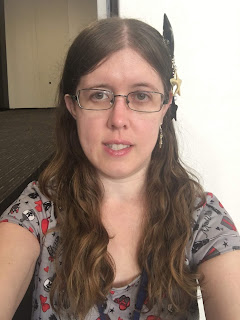 The fashion show was amazing. It was nice to see some of the dresses that I had seen online up there on stage in real life. Here's a few of my favorites… 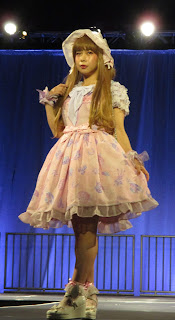 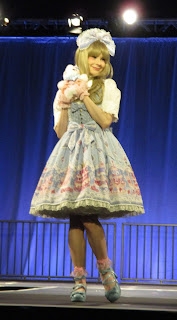 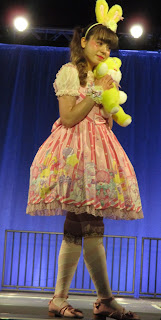 After the show, I went to the Angelic Pretty booth to see if anything new had been put out. I didn't see much different from before so I just got a pic with Chisa. 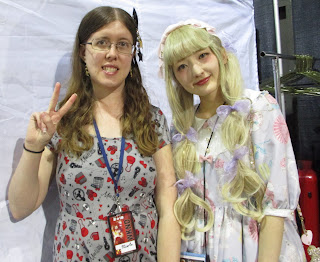 She was still wearing her coord from the fashion show. I believe the print is called Doll's Tea Party.  So cute <3

I did some more shopping and attended a couple panels. Minori- History of Shironuri Fashion and Angelic Pretty- Q&A. It was interesting to see their presentations and hear their responses to questions from the audience. I tried to get pics but they were all pretty blurry :-(

At the panel, Minori mentioned that she had a booth in the vendor's room and invited everyone to stop by. Of course I had to go take a look. There were accessories that she had designed and made, postcards, photo books, and posters. I got a poster which she autographed along with a pic of us. 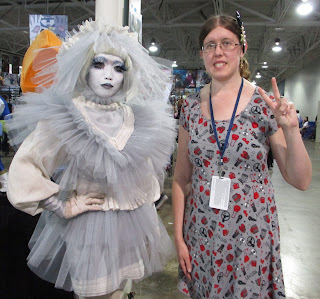 She was wearing an outfit that she had designed and made herself. I loved the grey and white colors together with contrasting textures. So beautiful <3

After a busy day, I was ready to head back to the hotel and sleep. But not before a quick stop at the display case which contained a sample of the items that would be in the auction the next day. These little Eevee plushies caught me eye. I pointed them out to my boyfriend. Perhaps he could bid on them while I was at the tea party. 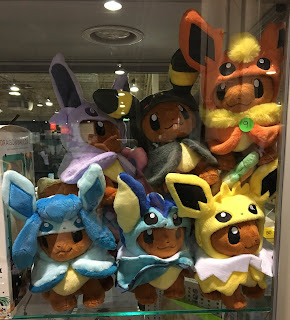 Email ThisBlogThis!Share to TwitterShare to FacebookShare to Pinterest
Labels: Convention 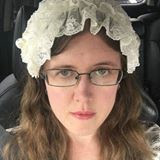